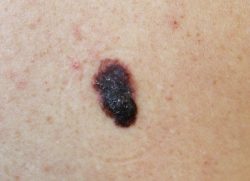 Of all skin cancers, melanomas are the most feared. Unfortunately, Australia has one of the highest rates of malignant melanoma, with South East Queensland and Northern NSW having the highest incidence worldwide. Concerningly, melanoma rates doubled between 1986 and 2006, and are still rising. It is the 3rd most commonly diagnosed cancer, with 1 in 14 men and 1 in 24 women having a melanoma in their lifetime, or approximately 14,000 new melanomas every year. Whilst it makes up only around 2% of all skin cancers, melanoma is responsible for 75% of all skin cancer deaths. For those aged under 40 years, melanoma is the most common and most lethal form of solid cancer. Some melanomas grow very slowly, whilst some can grow very quickly and can kill within a matter of months. It’s important to seek an expert opinion on any skin lesion which elevated, firm and growing – it may save your life!

Malignant melanoma is a cancer of the cells that make the pigment in the skin to form naevi or moles. They present as a new or changing ‘mole’. Risk factors for melanoma are: 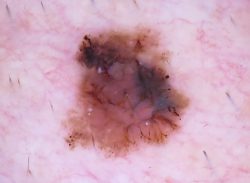 Studies show that with early diagnosis and surgical removal the majority of melanomas can be cured. The likelihood of cure is determined by how deeply the melanoma invades the skin: the thicker the melanoma, the more likely that it will spread to other parts of the body. Spread can occur with melanomas that are 0.2mm thick! All skin lesions that are suspicious for melanoma should have an initial surgical removal (such as excision biopsy) to confirm the diagnosis and determine the thickness of the melanoma. Based on this biopsy result, a second procedure (i.e. wide excision) is performed that provides a safety margin that is proportional to the thickness of the melanoma. This safety margin is between 0.5cm to 2cm in diameter. The wide excision is important for preventing the melanoma from recurring and reduces the chance of it spreading to other parts of the body. Thicker and higher risk melanomas may be referred to a surgeon for the wide excision, and for consideration of a sentinel lymph node biopsy (which is performed in hospital). For melanomas that have spread throughout the body, new immune therapies, such as pembrolizumab, are improving patient survival.