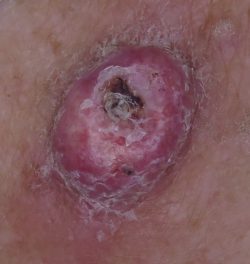 Squamous Cell Carcinomas (SCCs) are the 2nd most common type of skin cancer, accounting for around 30% of non-melanoma cases and approximately 350 deaths in Australia annually. It begins in the upper layer of the skin, called the epidermis, and usually appears on areas with the most sun exposure, such as the face, neck, hands, forearms and lower legs. SCCs generally grow quickly over weeks to months. Whilst they are less likely to spread around the body than melanoma, when they do, they can be just as lethal as melanoma.

Risk factors for SCCs are: 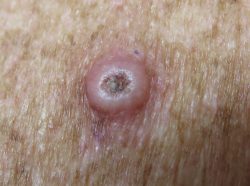 Squamous Cell Carcinomas appear as thickened, red, scaly spots or a rapidly growing skin lump. They can also present as a sore that will not heal, and are often quite tender to touch. Diagnosis of SCCs is made using a combination of dermatoscopic examination and/or biopsy. Treatment of SCC is determined by how thick or invasive the lesion is. Where the SCC is only on the skin’s surface (i.e. superficial, also called Bowen’s Disease or Intraepithelial Carcinoma), then treatment can include phototherapy, cryotherapy, topical creams such as 5-Fluorouracil or Imiquimod, as well as surgical options such as curettage and excision. For invasive SCCs, surgical removal by excision is the main treatment. In some cases of advanced SCCs, then referral to a surgeon may be organised for complex excisions. A minority of cases also require the use of radiotherapy, especially for SCCs on the head or neck that are large or deep tumours, or that are invading local nerves or lymphatics.